After its outstanding success in 2018, the Louvre found favor with the public again in 2019, attracting 9.6* million visitors—the third time visitor numbers have exceeded the world-record figure of 9.5 million.
The year 2019 was marked by:
– new free activities (in particular the “Saturday Night Openings”) introduced in the Pyramid’s 30th anniversary year and already attended by over 210,000 people;
– the start of renovation work on the busiest part of the museum—the Denon wing, including the Salle des États (home to the Mona Lisa);
– heightened attention to visitor flow and visiting conditions by encouraging online booking (especially in June, July and August).
During the summer months, the museum’s proactive flow management policy brought visitor numbers down from one million to 800,000 per month.
The December strikes and the “Yellow Vest” demonstrations did not impact attendance due to the specific characteristics of the Louvre’s visitors, 75% of whom are foreign.

The world’s most visited museum
In 2019, about 25% of the Louvre’s visitors were French, with visitors from other countries* representing almost three quarters of total attendance. Most of our foreign visitors came from the United States, China and the European Union (Spain, Germany, Italy and the U.K.).
The Louvre continues to attract young people: almost half its visitors are under 30 years old, and there were over 500,000 school visitors in 2019. The museum has a strong presence on social media; its Instagram account has over 3.5 million followers ( up 47% from 2018).

The museum continues to focus on improving the visitor experience. A major renovation project was launched in 2015 to improve access to the museum and enhance its galleries; 35,000 m² of exhibition space have been totally renovated to date.
The almost 3,700 m² refurbished in 2019 include the Salle des États, which had to be closed for only three of the ten months of the renovation. The gallery now boasts informative texts in several languages, a new visitor circulation route, improved lighting, floors and walls, and greater transparency for the Mona Lisa’s glass case.

“Our goal is not so much to attract more visitors as to provide better visiting conditions,” says the Louvre’s president director Jean-Luc Martinez. “We are only able to meet the challenge of carrying out such an extensive renovation without closing the museum thanks to the commitment and professionalism of our staff. I am delighted that we can continue to enchant visitors of all ages and from all walks of life and share the pleasure of admiring the masterpieces of art history.”

For the renovation of its busiest wing in 2019, the Louvre focused on optimizing visitor flow. The online booking system—already used by the majority of individual visitors—guarantees admission to the museum within 30 minutes and ensures better visiting conditions, particularly during peak periods, by leveling out attendance throughout the day. Pre-booked time-slot tickets are the only guarantee of admission to the museum on busy days and are strongly recommended; they are compulsory for the “Leonardo da Vinci” exhibition and the activities in the Richelieu wing on Saturday Night Openings. 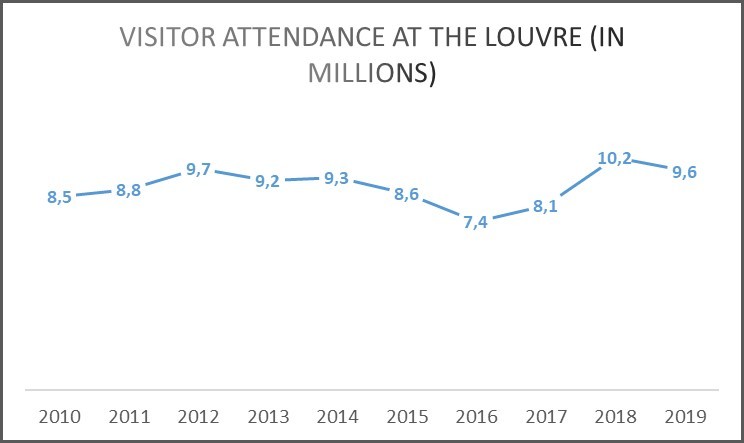 Free admission to the Louvre
40% of the Louvre’s visitors are admitted free (under-18s; 18-25 year-old residents of the European Economic Area; people on income support; disabled visitors and the person accompanying them; teachers with a “Pass Éducation” card; journalists, etc.). Saturday Night Openings (on the first Saturday of every month) were introduced in January 2019 to allow everyone (especially local people) a chance to enjoy a varied and festive program of activities at the Louvre in the best possible conditions. These events have been a huge success: in 2019, they attracted over 160,000 visitors, mostly families and working-age adults from the greater Paris area. The Saturday Night Openings attracted as many visitors as the six free Sundays they replaced, and have benefited local people rather than just tourists. The initial trial period is being extended to the first semester of 2020.

The 30th anniversary of the Pyramid was celebrated in due style with a series of free events:
– an installation called “JR at the Louvre and the Secret of the Great Pyramid”: a collage installed by 400 volunteers from March 26 to 31 and viewed by 2 million people on Instagram;
– “Un break à Mozart 1.1”: a dance performance choreographed by Kader Attou, performed on July 12, 13 and 14 opposite the Pyramid and watched by 4,500 spectators;
– the final stage of the Tour de France, which passed through the Cour Carrée on July 28 and was watched by 5.7 million TV viewers in France;
– the “Cinéma Paradiso Louvre” festival, held in the Cour Carrée from July 19 to 26 and attended by some by 15,300 people;
– the “Mystery in the Tuileries” adventure game, played by 13,500 people between July 6 and August 25;
– the Louvre at Paris Plages, at the Bassin de la Villette, visited by 9,400 people between July 6 and September 1.
This popularity with the public is a fitting tribute to the architect Ieoh Ming Pei, who died on May 16, 2019 and whose Pyramid changed the destiny of the Louvre.

Flagship exhibitions in 2019
The exhibition “A Dream of Italy: the Marquis Campana’s Collection” (from November 7, 2018 to February 18, 2019) coorganized with the State Hermitage Museum (St. Petersburg) drew over 170,000 visitors. The exhibition “Forgotten Kingdoms: From the Hittite Empire to the Aramaeans” (from May 2 to August 12, 2019) attracted almost 160,000 visitors—a remarkable attendance for an exhibition on a little-known civilization. The Petite Galerie continues to be a great success: “Archaeology Goes Graphic” (from September 26, 2018 to July 1, 2019) drew 345,460 visitors. October 2019 saw the opening of the major exhibition “Leonardo da Vinci”—a huge domestic and international hit with record attendance (numbers will be communicated after the exhibition ends on February 24, 2020). The “El Greco” exhibition, co-organized with the Réunion des Musées Nationaux at the Grand Palais, showcases the work of another Renaissance genius, while “Soulages at the Louvre” opened in the Salon Carré in December, marking the centenary of the artist’s birth.
The exhibition “In the Studio: Creation at Work,” at the Musée National Eugène-Delacroix from May 15 to September 30, 2019, was also a great success, attended by some 75,000 visitors.

True to its mission of making art accessible to everyone, the Louvre went out to meet its public both in France and abroad. Some 140,000 visitors attended its exhibitions in Grenoble (“Serving the Gods of Egypt,” from October 27, 2018 to January 27, 2019) and in Pau (“Power Plays,” from October 17, 2018 to April 14, 2019), and an exhibition on the excavations of Apollonia Pontica drew 11,500 visitors to the Museum of Sofia in Bulgaria.
The Louvre-Lens had over 500,000 visitors in 2019 (in comparison with 482,000 in 2018), and more than 4 million people have visited the museum since it opened. The Louvre- Lens prides itself on its high percentage (50 to 55%) of visitors who do not consider themselves regular museum-goers.
The Louvre Abu Dhabi has had over 2 million visitors since it opened on November 8, 2017, making it the most visited museum in the Arab world.

*Consolidated results will be available in the first semester 2020.