The global producer/DJ sensation showcased the iconic museum in a way like never before with 450 light spots, 2 drones, a 70 minute music set and 150 people working around the clock to make the event possible. The set has amassed more than 16 million views and continues to raise money for charity. 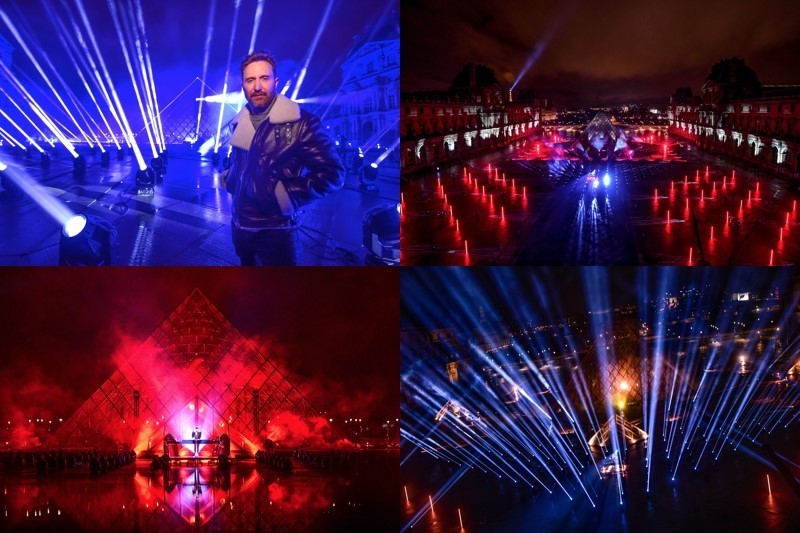 Watch it here and donate here
In partnership with PS5 and Xiaomi.

Global superstar DJ/producer David Guetta made a huge artistic statement over new years with a performance at one of Paris’ most iconic locations: the Musée du Louvre. The show was the third edition of his United At Home series which aims to unite fans from across the globe to raise money for those in need. The show has been watched more than 16 million times and you can watch it again here  and donate here. 7.8M people tuned in on Facebook, 2.4M on YouTube, 740K on VK, 270K on Twitch, and the performance reached 4M people on TV across TV and Insight TV.

His impressive DJ set and light show (including 450 light spots and 2 drones) showcased the Louvre in an incredible new world and delighted viewers across from the world from Australia to Brazil, Germany to Russia, highlighting the Louvre in a unique festive and magical way.

United At Home from the Louvre is available on YouTube and Facebook and the crowdfunding continues. The partnership between David Guetta and Louvre will certainly go down in history as these two cultural icons joined forces for a  state-of-the-art production that brought some festive energy to homes across the planet.

“After a difficult year, I couldn’t have wished for a more special way to ring in 2021”, says David Guetta. “The Louvre is admired all over the world and to have the opportunity to make it our own for this show is a huge honour. Thank you to everyone who joined in and donated and if you haven’t already, you can still check out the show and donate. Big thanks to the Louvre for having us and let’s hope 2021 promises some positive change for the cultural industries and doors will open again soon”.

“I am delighted with the tremendous success of David Guetta’s New Year Eve benefit concert”, says Jean-Luc Martinez, President-Director of the Musée du Louvre. “This spectacular, generous and popular initiative has allowed millions of people in France and around the world to celebrate the arrival of 2021 with the Louvre from home, until we are able to welcome visitors once again in person to the museum. I am happy that this palace, which has been an integral part of French history for eight centuries, continues to inspire some of the best contemporary artists across all sectors of the creative arts. Like so many others, I was amazed by David Guetta’s appreciation of the Louvre, its collections and its architecture, particularly the Pyramid. I’d like to thank everyone who participated in this charitable fundraising effort and especially the individual donors. I would also like to take this opportunity to extend our best wishes for the new year from the entire museum team.”

After already raising over $1.5 million for charities with his United At Home events hosted from Miami and New York, David Guetta’s third edition of United At Home in Paris is dedicated to UNICEF and Les Restos du Coeur. It is also possible to make a donation to the Louvre, which had to close its doors during 6 months. Dedicated to unite people throughout these unusual times, David Guetta connected with people all around the world and brought some light and joy to households worldwide to slide into the new year in a very festive way.